Are Two Brands Better Than One? 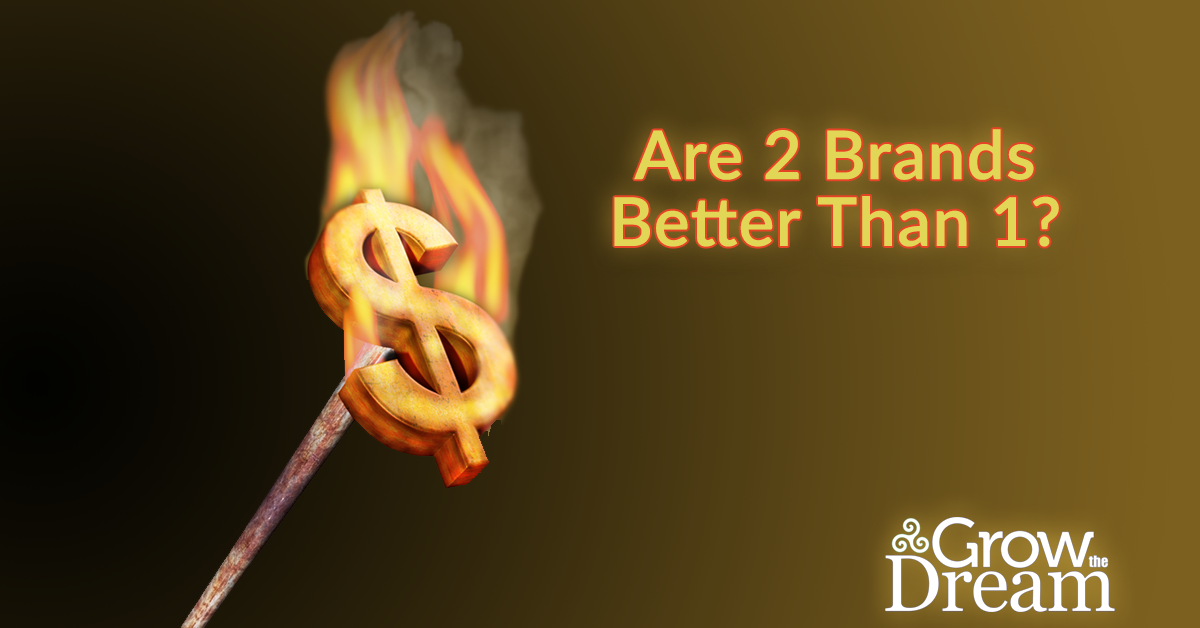 Quick quiz – what do a gecko, manatees in t-shirts, Randy Jackson at a dog show, McGruff the crime dog, He-Man & Skeletor, Maxwell the pig, and an old guy saying, “As long as…” have in common?

They’re all in GEICO commercials. GEICO has no less than 13 distinctly different marketing campaigns running at this moment – and while none of them contradict one another, they have several different slogans, ranging from the most well-known, “15 minutes could save you 15% on car insurance,” to “You can count on people saving money with GEICO.” They spend more than $1.4-Billion on advertising every year.

Some people see this as brilliant and it has led to GEICO becoming the second largest insurer after State Farm. But I look at all that excessive noise as a marketer and see too much chance of brand confusion. It’s hard enough for the average person to remember the brand or connect name recognition with just one solid marketing strategy, let alone more than 10.

But What Does That Mean For You?

You probably found this article because you, or your board of directors, or your investors were trying to determine the exact question posed in the title: Are two brands better than one?

The short and simple answer is NO.

Most businesses, especially the small business and sole proprietor entrepreneurial clients we serve, have neither the time nor the resources to establish and manage two separate brands, especially in today’s highly connected social media world.

Do You Really Want to Double Down?

To establish two brands, you would need two separate audiences and approaches to your marketing. You would need to maintain and publish on social media accounts for two separate brands, meaning you’d need potentially two Twitter accounts, two Facebook accounts, two Instagram accounts, not to mention the Snapchats and the Pinterest boards, LinkedIN’s, and Ello accounts – all based on strategic work, of course.

Yes, to launch two brands, you’ll need to do extensive strategic work on both brands and their potential customer base. How else will you ensure you are discovering and targeting the perfect clients for each brand?

Don’t forget the setting up and creating material for two content blogs, Facebook and Google ads, scoping out Yelp, Angie’s List and other review sites for two brands. Imagine doing Double Dutch – and you’re holding both ends of the ropes and jumping simultaneously.

I’m exhausted just writing it all down.

So How Do Coke and Anheuser-Busch Do It?

Well, when you’re at the level that those mega companies are, you can divide your marketing. Coca Cola has separate marketing departments, budgets, strategies and campaigns for each of their brands – Coke, Diet Coke, Coke Zero Sugar, Sprite, etc.

And while Anheuser-Busch does something similar, they have an entire office staff that just charts their advertising campaigns and their market indicators. Sales of Bud Light drop more than 1.5% — they cancel the existing ad campaign and push the next one in it’s place. They do the same for Budweiser, Michelob, Landshark, Shock Top and Rolling Rock and all their other brands.

That’s also why you can no longer buy Bud Dry, Bud Silver, and Red Wolf. They all either failed sales expectations or were replaced by something that was more marketable.

The truth is that just creating and maintaining one strong, well-positioned brand takes considerable effort. And it pays off – too many ‘public faces’ for your business leads to brand confusion and can even cut into your customer base if wires or communications get crossed.

So Just What is a Brand?

That depends on who you’re talking to. Of course, the term itself has its roots in cattle ranches. The brand would be the identifying mark burned into the flesh of livestock to let everyone know who owned which animal.

As we progressed into the late 19th century and general goods stores made way for supermarkets and department stores, the makers of various goods and services would put their name branding on it – Coca Cola, Tide, Kleenex, etc.

Today, brand and branding is more than just a name or a generic concept about a product. When people like me say Branding, I’m referring to the creation of a perception in the prospective customers’ minds about what a company does or produces. The intangible sum of attributes and attitude.

For an example, look at Walmart – for the 2018 Super Bowl, they engaged 3 film directors to create 1-minute films that aired as commercials, all based around the company’s newest push to try and reclaim ground from Amazon – the Big Blue Box that gets delivered. The videos were all conceived to create a perception in the viewers’ minds.

Your brand communicates the value you bring to the buyer. If it’s done well, your brand will become an instantaneous and unconsciously recognized statement of who/what your business is and why your ideal customers (and outliers) should buy from you. It doesn’t have to be in your name, but it certainly helps.

There was a bit of a kerfuffle several years back when General Motors issued a memo to all of their Chevrolet employees making it clear that they were only to use the term Chevrolet to talk about the car & truck maker. In other words, “Chevy” was verboten. The employees raised their concerns and eventually GM dialed back on the edict.

While it won’t work for every company, and especially hard for a small business to establish for itself, a nickname is usually a good thing for your brand…and preferably a nickname your customers give it.

People who use a brand’s nickname feel closer to the product than those who don’t. It indicates an emotional connection to your brand. But you can’t force it or invent it yourself. Ideally, as a company grows, you’ll not only pick up a nickname to go with your formal name, but also the marketing trifecta – a powerful visual aspect that stands out.

Chevrolet has the bow tie. Coke has the contour bottle. McDonalds the golden arches. While we’re not as famous as those industry leaders, we at Grow the Dream have our green triskelion.

But What If I NEED Two Brands?

There are a couple of routes you can take here, if you see no alternative to creating two different brands.

The first question to ask is, how distinctive do they need to be? Does your second brand clearly have a different customer base, vision and values? Or could it become a sub-brand under the umbrella of your larger, more visible brand?

As I mentioned earlier, Coca Cola does a good job with this – we have the original, then Coke Zero Sugar, Vanilla Coke, Cherry Coke, Coca Cola Life, and Diet Coke.

Of course, Coca Cola makes and markets more than just Coke. They have Sprite, Dasani, Fanta, Minute Maid, Powerade, Simply juices, Fresca, Vitamin Water, Smart Water, Mello Yello, Fuze, Honest-Tea, and Odwalla. Most of which are branded so separately from the ‘mother’ product, that most of the world doesn’t even know they’re connected.

Google did the same thing. They spun the company’s Research and Development department, what co-founder Larry Page refers to as their Tesla projects (referencing the scientist, not the car company), into one of several smaller companies. All of those enterprises are separate from the search engine and related Google utilities, but all falling under the umbrella of Alphabet.

So if you have to split off, you’ll need to figure out how wide to make the divide and whether the two can complement each other in some way or must be separate.

One advantage you will find if you’re using automation software like Infusionsoft to manage your marketing is that you can set up separate tags and processes within the program to manage each side or aspect of your business. And if you’re struggling with how to do this on your own, we’d be happy to help out.

So, yes, you can create two brands, and yes, occasionally that is better than a single brand. But I’d strongly advise waiting until you’ve built beyond the entrepreneur or small business stage before you attempt it. And make sure you have staff and solutions in place to make it work – or you might end up with no brand at all.

On a side note, there are two weirdly successful examples of companies that kept the Brand name, while applying it to two different products and services for completely different audiences. Guinness, the beer maker, also maintains and publishes the annual list of world records. It was originally just intended as a 1000 book marketing giveaway. The second is Michelin. The tire-maker, in an effort to encourage people to travel (to sell more cars and tires for them) in 1900, started giving away a guide to places to see and dine. In 1926, the Michelin Guide switched to focus solely on restaurants and initiated the star system that is the pinnacle of restaurant reviews today.