Redefining Freelance Workers, Not Abusing Them 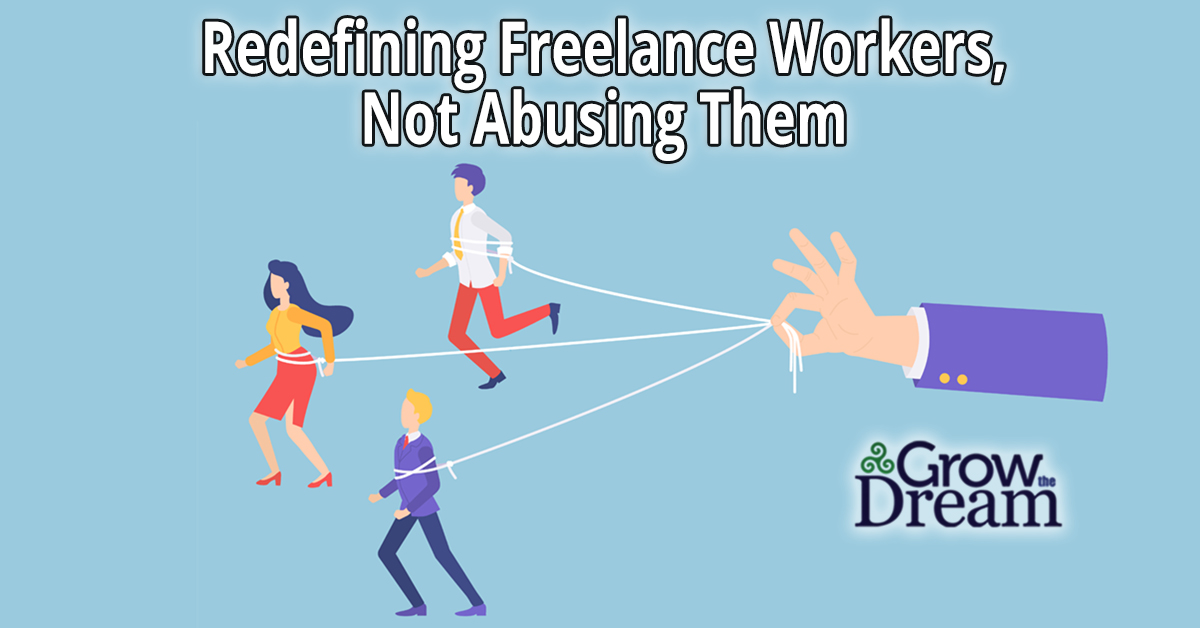 All the way back in October of 2019, I did a rather extensive article on the growing freelance world. No longer would all or even most freelancers be classified together. Because of what we now refer to as the gig-economy, there are many more forms of freelancing and part-time freelance work that must be considered.

It used to be that if you wanted to earn a little extra money, you’d get a part time evening or overnight job at a fast food restaurant or Kinko’s. Now there’s everything from part-time multi-level marketers to renting out your home or car – or a portion of it – to secret shopping and piece work for both industrial and personal assistance tasks. The last numbers I saw recorded approximately 16-million freelancers in the United States.

What was once a growing trend quite simply exploded during the recent Coronavirus-induced lock down. While many industries suffered at first, people working for Postmates, UberEats, and InstaCart got considerably more work. And, thankfully, as essential workers, they were valued by the people receiving those deliveries. I had one friend, who between larger and more frequent deliveries and higher grateful tips, earned more in three months than he had for the prior year, even working multiple jobs.

Once we recovered from the initial shock of sheltering at home as a nation, many companies shifted immense amounts of their daily tasks to both online and freelance applications. But as often happens when there is such a quick, radical shift, some of the early benefits to freelancers started to evaporate or be subsumed by corporate interests. Even in small businesses.

In the words of Darth Vader, “I am altering the deal. Pray I don’t alter any further.”

Not the Best of Both Worlds

One of the biggest issues I’ve seen are companies pivoting to more freelance arrangements, with a caveat. The companies want the benefit of employing freelancers, but expect the freelancers to behave as employees.

So they only pay by the hour – but they expect full availability. This can be a company that wants their employees to work for 5 days, but is only willing to pay 20 hours – 4 hours a day, 5 days a week. Or a company that demands that their freelance employees “clock in” every single day, seven days a week.

Sometimes, they’ll ask freelance workers to attend training or meetings, but as unpaid time. They’re paid by the project accomplished. That’s great when you’re getting $13 for remotely monitoring a phone conversation that runs 20-30 minutes. That’s $26-30 per hour, not bad in many parts of the country…until you add up the extra hours that they’re not being paid, because of how time is billed.

It’s not fair to take advantage of the benefits of having freelance workers while limiting the benefits to them. What’s more, you will see the best workers disappear as they get frustrated or seek better situations. Suddenly, you’ve cut off your nose to spite your face.

Something employers never seem to think about, but employees wrestle with all the time, is whether or not to pad their time, or look for loopholes in the system to benefit them. The more good freelancers you lose, the more likely it is you’ll hire one of these less scrupulous contractors – and the only one you have to blame is yourself.

Plus, if you don’t see the issue or course correct, you’re establishing a very negative work culture. It may not legally be a hostile work environment, but it’s certainly not a pleasant one.

Another related issue is restricting freelancers from working for other people. Now, I’m not talking about conflicts of interest. It’s understandable that you wouldn’t want one of your employees or independent contractors working for your nearest competitor. But I’ve seen situations where employers will only guarantee a small amount of work, yet require the freelancer to sign an agreement that she won’t do the same type of work for anyone else.

Again, that’s fine if it’s a competitor, or if you’re employing them full time. But it’s technically illegal to restrict someone’s ability to make a living. This also crops up in unusual ways. When I was working for Paramount Television back in the day, my boss came to me angry because she found out I was working part time for the Home Shopping Network.

Now I wrote and produced commercials, promos and the occasional movie trailer for Paramount’s UPN network. At HSN, I was sitting in a cubicle, taking phone orders. I was in the same building as their broadcast facilities in St. Petersburg, but I was not in any way doing the same work.

What We Have Here is… Failure

With the sudden advance in adapting to virtual work, there’s one factor that may have fallen through the cracks. It’s not even necessarily anyone’s fault, it’s just that sometimes a new situation leads to added challenges.

When you’re in an office setting, quite often you hear and know even more than you’d like to. Unless you’re a busybody, or an energy vampire like Colin Robinson from What We Do In the Shadows, there’s almost too much information. But now, we have no water cooler, no office gossip, no back and forth. And, also, less communication, from both the leadership and your colleagues.

In most cases, it’s not intentional. But now that you’re aware of it, that’s exactly how you must handle communication – intentionally. As the leader of your business, you need to adequately communicate. This might even start with over-communicating, just to make sure everyone’s on the same page. You use tools like Basecamp, Slack or Cliq, to keep everyone in a very large loop. That way no one’s left out or forgotten about, or finds themselves suddenly in the middle of an emergency because they were uninformed. You must communicate with your team.

Fire in the Hold

A potential side-effect to lack of communication is the last minute fire bomb. The famous quote from Bob Carter comes to mind: “Poor planning on your part does not necessitate an emergency on mine.” But all too often, especially if you have hard working, loyal employees and freelancers, they don’t invoke that clause. Instead, they bend over backwards, making an extreme effort to save you or your business from your failing. Imagine how frustrating that can become when it happens over and over.

You can have the best laid plans, everything in place, ready to go… But if you haven’t communicated that to your people, they feel left out or ambushed when things start to happen. Or, if you’re blessed with freelancers and employees who take initiative, they may be stymied or made to feel unappreciated. They’re not trying to usurp your position – they’re trying to help out by taking the reins, because you’ve left them uninformed.

When handled appropriately, freelancers can become some of your greatest assets. The wrong ones can also sink your business ship very effectively. The key to finding and keeping the best ones lies in making sure they feel appreciated. Income is nice and necessary, but hundreds of studies have found purpose is a better driver of achievement.

Keep them informed. Make them feel like a team or a vital part of the team if you’re split between full time staff and freelancers. Allow them to reap the benefits of being part of the gig economy without micromanaging them within an inch of their professional lives. Try to find the best win-win situations, and reward the ones who stick with you.

When we work as a team, we make everyone’s lives better. Let’s Grow The Dream together!