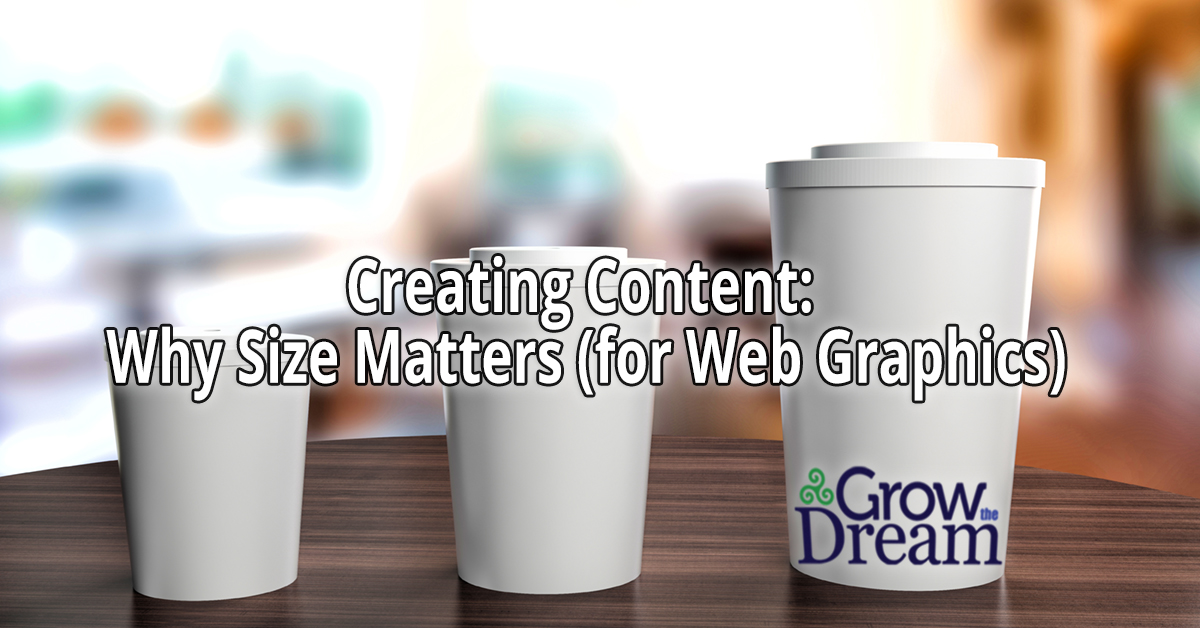 We’ve talked about ideas for content blog posts – making sure they’re targeted and relevant to your ideal customer. And we’ve gone over some great tips for coming up with a headline that grabs the prospective readers’ attention.

So this week, we’re going to dive into another aspect of successful content blog posts. And this is one many people may not have really considered – image size and use.

In 1929, the movie Blackmail was released in two formats. Alfred Hitchcock, at the behest of the studio, directed the film as both the original silent film he had devised, and as Great Britain’s first “talkie.” Hitchcock, even before he became an esteemed director, had earned notoriety for shooting silent films with as few title cards as possible.

Part of his signature style was to tell as much of the story with visuals as possible. What he called ‘pure cinema.’ Even after he came to Hollywood, he would often try to restrict dialogue in his films to saying things he could not convey with visuals – or statements that the visuals contradicted (i.e., showing a character lying)

I saw the two versions of Blackmail back to back a few years back at a theater – and the silent film told the story far better than the talkie version.

I share my experience with Blackmail to illustrate a point.

We’ve talked before about how images are important for blog posts. We all know the old adage that a picture is worth 1000 words. Scientists tell us that our brains have a profound attachment to visual information. We remember visual information longer and more accurately than written or spoken details.

Researchers have also proven that our brains process images some 60,000 times faster than text.

According to the theory of dual-coding, human memory has two main forms of retention: verbal and imaginal. Of these, concepts conveyed visually are almost literally cemented into our memory, whereas verbally or textually transmitted information is more abstract.

Great images convey information to the reader, complementing the written information, while breaking up the text and making it more inviting to read. Images can reinforce key points of your post, and our brains see articles with images as ‘more real,’ deepening the readers’ connection and building credibility.

From Instagram to Pinterest to Facebook and Twitter – posts with images are more sharable and more prone to be shared by readers. Images are also reposted/shared significantly more than static posts, even on less obviously visual platforms.

In 2017, Jeff Bullas discovered that posts with images on Facebook had at least 37% higher engagement than text-only posts. Blog posts with images get 94% more total views than articles without. And consumers were 60% more likely to do business – or even visit – a business site with images in local search.

Plus, even if you’re not properly utilizing titles, meta tags and alt text, images boost a post’s ranking on Google (and all the other search sites). If you are tweaking those things, it increases visibility (“see” what I did there?) even more.

But for some reason, many companies that embrace content blogs and periodic email blasts still resist using images.

Nobody Wants a Small Pizza

Now that we’ve established that you need graphics, how big should they be? Unfortunately, the answer is NOT one size fits all.

You can reuse some images in various settings without too much trouble. For example, a picture optimized for Pinterest can, in some instances, be repurposed on Instagram. Facebook already loves to use Insta-sized images. In fact, the almighty algorithm favors them when shared or even reposted from Insta to Facebook.

If you have the time and ability, your best practice is going to be designing a few images that are optimized for a few platforms. How do you know which to choose? You go back to your strategic work.

It’s not actually that hard. Even if you haven’t isolated your ideal customer down to the n-th specificity, you can use their general demographics to ‘estimate’ the right platforms. Instagram skews younger than Facebook. Tik Tok and Snap(chat) skew even younger still. ‘How to’s,’ wedding planning and DIY are the most popular areas of interest on Pinterest. Twitter tends to be slightly older, often tech-savvy people. You get the idea. You can click on the embedded links to get a clearer picture on audience and image optimization for each.

WordPress, which we highly recommend for your content blog, has specific parameters for the featured images on their pages –which may be truncated when shared on social sites. Because our ideal customers are people who utilize Facebook, Instagram and Twitter, I make three images for each of our content blog posts. One for WordPress that loads quickly and cleanly. Another of the same dimensions, but optimized for Facebook and Twitter for the social shares section of the post. And a third image for Instagram.

But on the Internet, size is more than just height by length.

The most obvious size issue for most graphics is just that – how tall by how wide. After all, web images are flat, right? Well, yes and no.

We don’t usually measure graphics on the Internet like you’d measure a physical object. You can’t put the tape measure down at one end and mark the width at so many inches. Well, in theory, you can, but that’s not how it’s done.

It all comes down to inconsistency. Digital images were first designed for very specific sizes. Everyone had the same screen, more or less, just like we all used to have the same 3-5 television screen sizes. But as things developed, screens got larger and smaller and the internet got more ubiquitous.

Photoshop, which started as a program to transfer graphics from Windows formats to Apple formats, as Adobe diversified its capabilities, started incorporating language and accepted norms from the print world. One of those elements was resolution.

For printers – the people, not the machines – everything was defined by how many DPI – Dots Per Inch. That could be anything from 22 DPI (low resolution) all the way up to 5000 DPI. Although most are somewhere between 150-600 DPI.

But with all those screen sizes, programmers had to find a flexible way to display consistent graphics, regardless if you were looking at the image on your 60” Led TV or your iPhone 2. So they transitioned into using pixels.

Pixels, or px, defines an image’s dimensions in a scalable way in CSS. In other words, an image 1200px by 628px on a website appears the same, regardless of how big the display was. An image that was 3in by 5in would always be the exact same size on every screen – tiny on your TV and giant on your smart phone.

The other reason to move away from inches to pixels was because digital images are not strictly flat. They have height, length, and depth. It’s just that depth in internet terms is more of a relation between resolution and file size.

As technology got faster and smaller, Google started giving more and more preference to sites that loaded quickly because more and more people were using tablets or smart phones. The faster a page loaded, especially over a cellular connection, the happier the searcher and the better Google looked for recommending it.

That’s not the only reason we started looking at streamlining loading times, but it is a significant factor. As a result, anything that bogged sites down becomes an issue that needed to be resolved. And still is in the process of being resolved, especially as Google rolls out their latest algorithm.

So pictures, images, graphics very quickly needed to be a good depth. Too deep and the site would get ‘dinged’ by Google. Not deep enough and the image is worthless. Suddenly DPI is important again. But not the exact same way.

Even though we switched from inches to pixels, we still express resolution in terms of parts per inch. Instead of dots, we were now using pixels. Most internet graphics are around 72ppi. You can raise those numbers, but increasing anything makes the file size bigger.

We measure file size data, based on a three way ration – height, width and resolution. Increase any measurement, either the others must decrease to match, or the file size expands. So the three graphics I built for this post are a medium resolution jpg for WordPress, a higher resolution social media png, and a high resolution square for Instagram.

I could do a whole complicated post on the different image file formats. Photoshop has 36 different file formats it can import or export. All for very specific purposes. The main two I worry about are jpg and png.

JPG stands for Joint Photographic Group. It is the most common file format saved by digital cameras. It was first introduced to the public in 1992, although it was first proposed as far back as 1972. Not to get too technical, but jpg was built to save the most essential data of an electronic image in the smallest form it could. So when the data is transmitted, the downloaded image was “close enough” to the original, although something was always lost.

PNG stands for “Portable Graphics Format.” Png was built to be an even better version of one of the earliest digital image designators – GIF. When I mentioned the early days of Photoshop, GIF was the format used to allow Apple computers to open Windows graphics and vice versa. In 1986, Png was introduced, becoming a popular standard by 2004. Png graphics are larger than Jpg’s because they store ALL of the information in chunks – nothing is lost.

Jpg and Png are the most used digital graphic formats you will encounter. We still have GIF’s and BMP’s, but those are less prevalent because they require so much stored information. Even in our world of ‘unlimited data,’ practicality wins out.

If you’d like to get started on your small business’ digital marketing strategy, or to talk to us about options for help – from training your team to handling your weekly content blog, please reach out. We’re happy to give you 25 minutes of our time with no obligations. We’ve built our business helping entrepreneurs build theirs.

Let’s Grow the Dream together!