What’s the Threshold Below Which a Potential Customer Would be Better Off Left to Competitors? 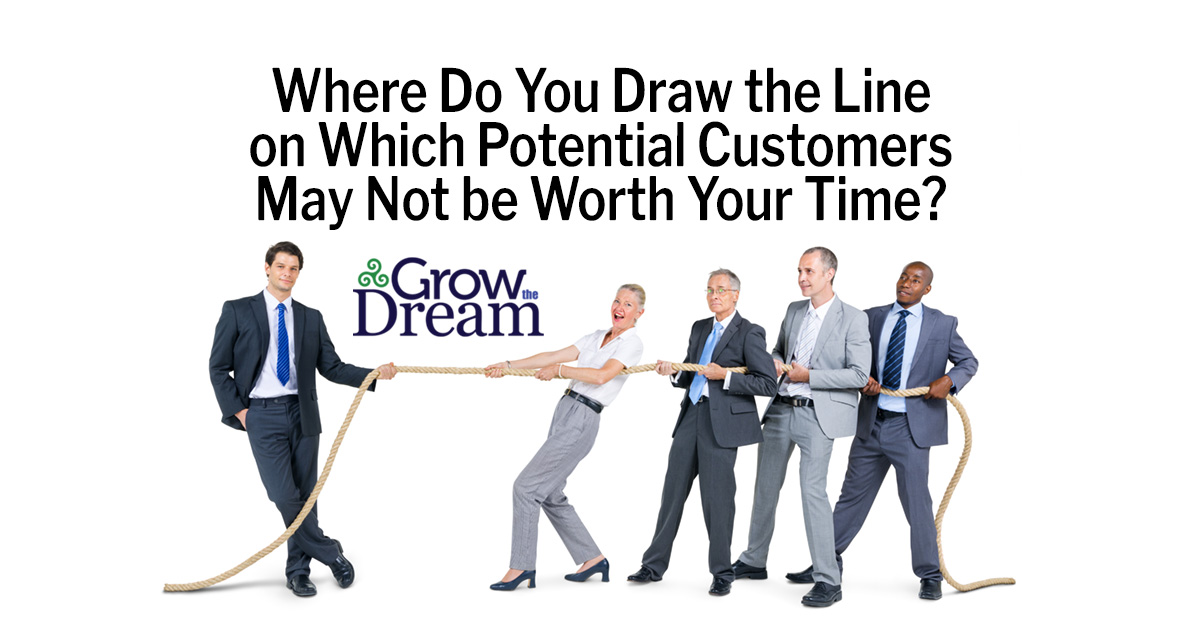 Wow. That title’s a mouthful. And a challenging idea to put out there. The blog post equivalent of social media’s “Controversial opinion:” Will you agree with me on the conclusions I’ll draw by the end of this article? Maybe, maybe not. I’ll tell you, companies that don’t question the status quo don’t usually stand out. And their business suffers for it. So for that reason alone, I hope you’ll keep reading.

In the early days of the Revolutionary War, British army strategists came to the conclusion that three major cities would determine the ultimate outcome of the colonists’ rebellion: Boston, New York and Philadelphia. First they tried to hold the line in Massachusetts, but as we learned in school, General Gage used an old school military approach. Rows and rows of redcoats marching and firing in a broad line ended with twice as many casualties as the colonialists, including Gage’s career.

Their next approach was to take New York. A three prong approach was proposed to cut off access to the Hudson River and use the city as a base of operations. Although the plan was proposed by General William Howe, for reasons lost to history he abandoned the strategy and decided to capture Philadelphia first instead.

While he did take the city, his decision to abruptly leave his charted course and take a smaller prize cost the British the war. Without the bolstering reinforcements they were expecting, the other two British commanders lost troops and positions to colonials defending Albany and Saratoga. When the French saw this victory, they entered the war on the Americans’ side – permanently turning the tide of battle to the newly emerging United States.

The word Strategy comes from the Greek στρατηγία, or stratēgos. And just like the game that takes its name from the Greek word, strategy is most often connected to war. A means of attack or defense. Just like the example I used above, strategy can make or break a battle, a war, a new world.

Strategy can be defined as a general plan to achieve one or more long-term or overall goals, usually with limited resources, and often under conditions of uncertainty. Strategy involves setting goals, figuring out the best actions to take to achieve said goals, and then utilizing the available resources to execute those actions.

I want to unpack this a little bit, because it will show the heart of strategy and why it’s important. And, I think, you’ll begin to see why the question posed by this article is not only one of the hardest to come to grips with – but the fulcrum around which strategy is best leveraged.

We all know why setting goals is important – in life and in business. Goals give you direction. Goals give you a roadmap – even if they don’t show the exact path, you know where you are heading and why.

While it is better to have a simple goal than no goal at all, I tend to lean on the motivational approach of S.M.A.R.T. goals. George T. Doran was the first to take the ideas of Psychologist Edwin Locke and put them in acronym form in 1981. The letters have taken on some different meanings over time, but I’m sure you’ll recognize it:

Unless you brought on a sales person. Or a more advanced, and therefore cheaper in the long-run, production process. Maybe hire an advertising firm. Maybe develop a system to convince previous buyers to buy again, or more, or give them as gifts.

But all that costs money – increasing your overhead. Okay, so maybe this isn’t always as easy as one task for one goal…

You’ve heard the phrase ‘You want it fast, cheap and good? You can only pick two.’ That’s where the resources come in. “Fast, cheap and good” equates to “Time vs Money vs Productivity/Skills”. Picture it as a three legged stool. In order to raise your business’ metaphorical seat of success, you have to balance all three aspects. Need to reduce the time – increase the money, or the skills. Need to reduce the cost of doing business? Either increase the skills or the time. Or both.

Now let me ask you, honestly, if you have limited resources – only so much time, money and skill – doesn’t it make sense to focus on a sweet spot where ideally all are utilized and nothing is wasted? No emotion here. Just consider it critically. Now keep that thought in mind while I make it painfully real.

Your Money’s No Good Here

You don’t need – or want – to help every customer who thinks they need you. Yes, I know, I know. Business success, even the largest global companies, comes down to people doing business with people. And inevitably those pesky emotions we have get in the way.

It might be a desire to be helpful and serve as many as possible. Maybe it’s the fear of not making payroll for this month – or any month. It might be a brotherly love for a friend or neighbor that we want to help out. It might be the pleasure you get at seeing a happy customer. Or a happy salesman. Let’s be honest, it might be greed – or wanting to be rich or powerful, famous or successful. All those grey areas of emotion that we’re told not to focus on, but which do motivate many of us.

Regardless of what the emotion is, we know that, just like how sales works, once an emotional decision is made, your mind works overtime to justify it. Emotions trump all logic and reason. That’s why we NEED strategy.

Strategy allows you to take the emotion out of the decision.

In 1896, Italian economist and sociologist Vilfredo Pareto published a book titled Cours d’Économie Politique (the Course of Political Economies). His groundbreaking work would become, for the business world, a work akin to Adam Smith’s Wealth of Nations or Charles Darwin’s Origin of Species, but not for decades after his death.

In it, Pareto noted that broadly 20 percent of the people owned 80 percent of the wealth. He further proved that the ratio could be extrapolated – 5% of people owning 50% of the wealth, for example. And that not only was it true in capitalist-oriented countries, but, in fact, the 80/20 distribution rule was generally true applied to all manner of business and sociological models.

Pareto would later go on to predict the rise of fascism more than 20 years before Hitler and Mussolini rose to power. But he is most remembered for the 80/20 rule. George Zipf would expand on Pareto’s research, to be picked up by Joseph Juran, and later John Maxwell would take Pareto’s Principle global.

I’ve gone over this before, but it’s essential to understanding the power of leveraging strategy as a small business owner or entrepreneur.

So, stretching back to our non-emotional decision, and now considering it in the light of Pareto’s Principle, which do you think you should focus on? It’s okay to make an emotional decision here – because this is going to lay the groundwork for your most important success factor as a small business owner.

Which people would you like to make your mission – the 20% that invigorate you and your bottom line? Or the 80% that make you wonder if you should invest in Tums and Tylenol?

It’s not just about your income. A great marketing strategy, properly executed can give you incredible peace of mind and joy in your business. It’s hard to argue with finding both emotional and financial health and balance.

For more than twenty years, we here at Grow the Dream have built our business by helping you build yours. And the cornerstone of that growth has been in teaching and implementing strategy. We take a strategic approach to our marketing – it works for us. And because it has always worked, we teach it to others.

If you found this article, it’s likely that you fit in the Venn diagram of our ideal customer – or you’re just outside it. A good marketing strategy not only draws customers in, but eliminates customers who are not a good fit. Just like you, we can only serve so many. But you might be surprised at how few customers it takes to generate real growth and business success.

Since you’ve read this far, I’m going to go into a little detail on our two main customer personas. Still broad strokes, just to give you an idea. As I’ve mentioned before, most businesses ideally serve 2-3 personas best.

Self-Starter: The self-starter takes one of our extensive courses on strategic marketing and is ready to tackle the world. They invest in a membership program and keep up to date on our blog posts. Once they’ve developed their marketing strategy, they drive forward. Every once in a while, they pop back for a refresher or to introduce a colleague to our programs, but essentially they’re on their own. And that’s what they prefer.

Gets It, But Needs a Boost: These clients understand the importance of what we teach, but have limited resources (usually time). They need our ongoing assistance, at least temporarily, to implement the strategies and custom buyer personas we’ve developed together. Eventually, they’ll be more self-sustaining, but keep us on retainer in case bigger things arise.

Cooperative Guidance: These are clients who were already growing, or who start exploding faster than they are able to handle. They like keeping their fingers on the pulse of their marketing strategy, but really need someone like us to keep them abreast of changes and maintain the consistency needed to continue their growth. They see it as a reasonable investment to have access to our team, rather than trying to hire a single person or department to do the same thing.

We’ve come to the end of our seven-part series on the questions small businesses must ask to properly build a strategic marketing strategy. And here’s my sales pitch…

Has this has been helpful?  Do you see yourself or your company in one of those buyer personas above? Would you like to take an even deeper dive into how a strategic marketing program can work, specific to your entrepreneurial needs? Please reach out. We’re offering, for a limited time, a free 25-minute consultation to anyone who fills out the form here.

Once you hit submit, someone from our team will reach out, with no obligation, to see if we can add value to what you’re doing now. And keep your eyes on this page for some announcements coming soon – we’re relaunching several of our strategic marketing educational programs and courses. If you’d like to be added to our mailing list for those announcements, just put that into the “How Can We Help? box here.

If you missed any of the previous articles in this series, the links to them are included below.

Where Are Your Customers Coming From?

How Are Your Customers Finding You?

How Often Does Finding You Lead to a Transaction?

Are Your Customers Looking for Long Term Solutions or Quick Fixes?

What’s The Cost to Get a Customer?

What is the Lifetime Value of a Customer?