The Changing Nature of Internet Use in the Age of Coronavirus 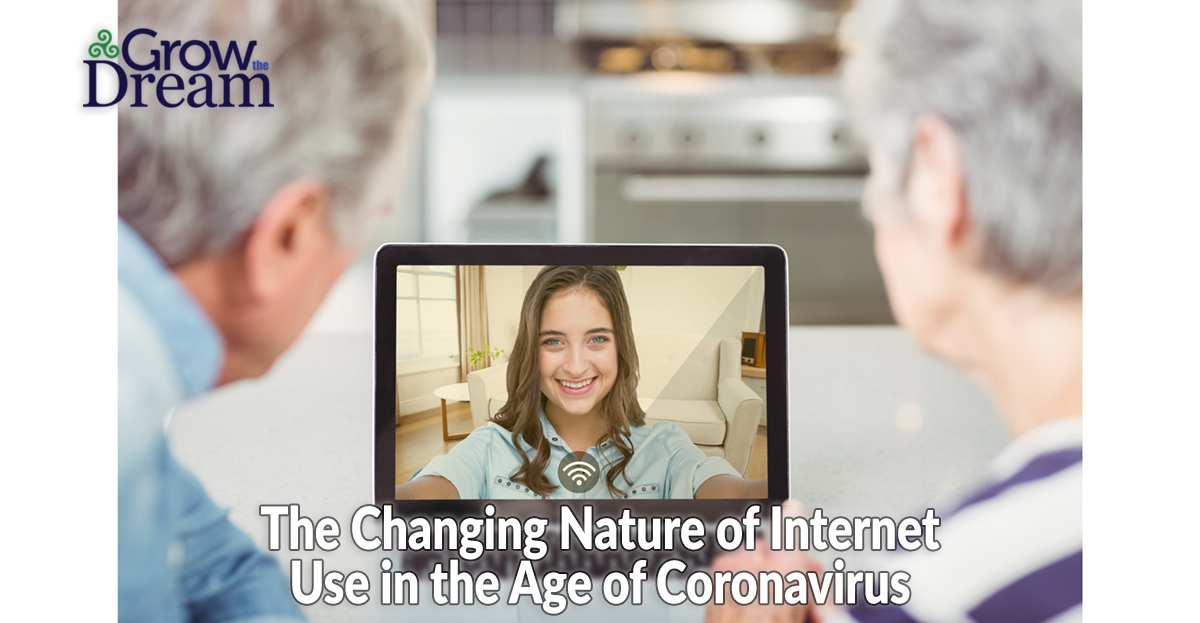 Unless you’ve been isolating under a rock for the past few weeks, you probably won’t be surprised by the statement that Internet use has changed since the novel Coronavirus started spreading throughout the United States and driving most of us indoors.

Unless you’re a worker in one of the essential businesses and industries, the definition of which varies from state to state, you’re probably furloughed or working from home. Even if you are employed in an essential business, hours have changed and nobody’s going out after work. At best, you’re hitting the drive thru on the way home.

Despite movie and television production sets being shut down, many of my friends in the Entertainment industry are busier than ever. Not necessarily more productive, but with schedules packed with classes, seminars, virtual interviews and listening in on online conversations. The late shows, Saturday Night Live and Parks & Rec have all proven you can still produce content while being stuck at home. A friend in Rhode Island remotely created an entire movie! More than 100 people shot their own segments, and it turned out even better than the network shows. You can check it out on Amazon Prime.

It’s probably no surprise that Zoom, not so long ago a fledgling competitor to GoToMeeting and WebEx, now dominates the online streaming market. Reports say that the platform is responsible for significantly more streaming bandwidth than Netflix, although some of that is due to chilling on Zoom while they watch Netflix with friends.

Speaking of the king of streamed content, Netflix subscriptions have skyrocketed, and the company is cash-flow positive for the first time since 2014. Both those numbers will dip once things start shifting back to “normal.” It should be noted though that analysts are predicting streaming numbers will stay more substantial even after theaters and other social venues re-open. YouTube is also posting gains in ad revenue, even as travel, retail and auto ad spending went down across the board.

In addition to Zoom – and often in spite of it, as the platform was early on subject to hacking and video-bombing – other video conferencing is also on the rise. Microsoft Teams, Google Classroom, Duo & Meet Hangouts, NextDoor, Houseparty and Facebook Live are all picking up the slack and all with varying results.

Gaming is also up. While video watching on mobile devices went down, the Apple & Google app stores are both reporting record rises in free and paid gaming downloads. In fact in March 2020 digital spending crested $10-Billion. Yes, with a B!

While folks couldn’t meet in the usual social settings – even when no one else was around – they found virtual spaces. Nintendo’s Animal Crossing sold 5-Million pieces – more digital units in a single month than any other console game in history. Not bad for a game that’s basically just hanging out on an island.

The latest version of first person shooter DOOM, Doom Eternal, sold 3 times as many copies as it’s predecessor in its premiere month. Call of Duty added a free to play mode called Warzone in March, and saw its monthly audience spike almost 170%.

Discord was originally launched to be a VOIP (Voice Over Internet Protocol) companion to MMORPG’s and other games who that lacked their own or well-integrated chat servers. Between Reddit and Twitch users embracing the technology, it grew exponentially. Now sheltered at home, Discord servers have filled the gap for hundreds of networking events and other social and business situations requiring real time voice chat, rather than the text based solutions from Slack and Basecamp.

There’s one major Internet change that most people may not understand the significance of yet. Google, the number one search engine in the world, has adjusted its home page to make information about the Coronavirus more reliably accessible.

If you do a search for Corona, coronavirus, COVID-19, COV-2 or any reasonable variant, the results page Google offers looks radically different than the standard. And in a way, it’s Alphabet giving us a peek behind the proverbial Wizard’s curtain.

In 2016, the European Union enacted the GDPR, and just in the past few months, California put new data collection restrictions into place – with other states looking to follow their lead. Earlier this year, one of our business allies posted a lengthy article on the sheer amount of data that Google, Facebook and Amazon collect as you use their sites.

By pulling back the curtain, Google reveals to the average user the truth of how extensive and specific its data collection is – even if it just holds onto it titself. And in fact, as potentially, well, evil, as the data collection can become – for the moment, it’s using it for a very good purpose.

And on the positive side, the technology of the sticky menu side bar with coronavirus results can be repurposed later to actually double down on what Google does well – personalization and diversification. Maybe even in a way as to help people find some more common ground.

Instead of the current algorithm, which uses your search history, browser fingerprint and tracking cookies to try and predict ‘what you’re really searching for,’ Google could provide several options, with the ability to use the left sidebar to narrow the specific purpose of your search.

Even what we think of as simple searches can be conflated and confused by the flexibility of the English language. For example, when you say, “I love chocolate chip cookies,” that has a significantly different meaning than when you say, “I love my wife.” Google sometimes struggles with these distinctions, which is why it relies on your search history.

Whether we realize it or not, Google and Facebook tend to constantly reinforce the echo chamber that so often defines our Internet and social media use. Google is living up to its in-house motto – ‘don’t be evil’ – but the algorithm can only rely on the variables it knows. So, often, what it thinks you believe, it parrots back in your search engine results.

Yes, it does get a little aggressive at times. It will insist on giving you spelling variations. It includes results for phrases that, based on what it thinks it knows about you, is what it thinks you really meant. Or autofilling from what other people have searched – even when you try to stop it.

But imagine utilizing the quintillions of data it has saved and can access to show you what it thinks you want – and eight to ten other iterations of that search string. So if it gives you the results you’re not looking for, you have ten more options to consider – in that sticky left menu – before you have to try and creatively reword your search to get what you actually did search for.

A Search by Any Other String

Of course, this would require Google confirming what we all already suspected. But, not to mix metaphors, that genie is out of the bottle already. OZ is revealed. We might as well try and keep using it for good.

And for small businesses? We would have more opportunity than ever before to access and utilize meaningful data which is likely even more meaningful than ever before…no more buying the domain that’s a weird misspelling of your company name or search string term.

This provides a more specific breakdown on what your ideal customer is looking for, and what search truly led them to you, and a lot less pointless traffic driven by a search algorithm that knows better than the customer what they were looking for.

As we work through this time of remote working, sheltering at home, and struggling to stay focused, I want to encourage you to not lose momentum. The experts are predicting another downturn in the economy, even another recession, as we weather this disease and fight to return to normalcy afterwards.

Our team at Grow the Dream not only survived the last recession – we built through it. And we can help you and your team build your business and cultivate your entrepreneurial dreams in these troubling times and beyond. Reach out if you’d like to discuss our small business strategy and we’ll do what we can to keep you going. Small business is our business and we’re here for you.