Outdated Stats, Undated Content, and How to Screw up Your Marketing 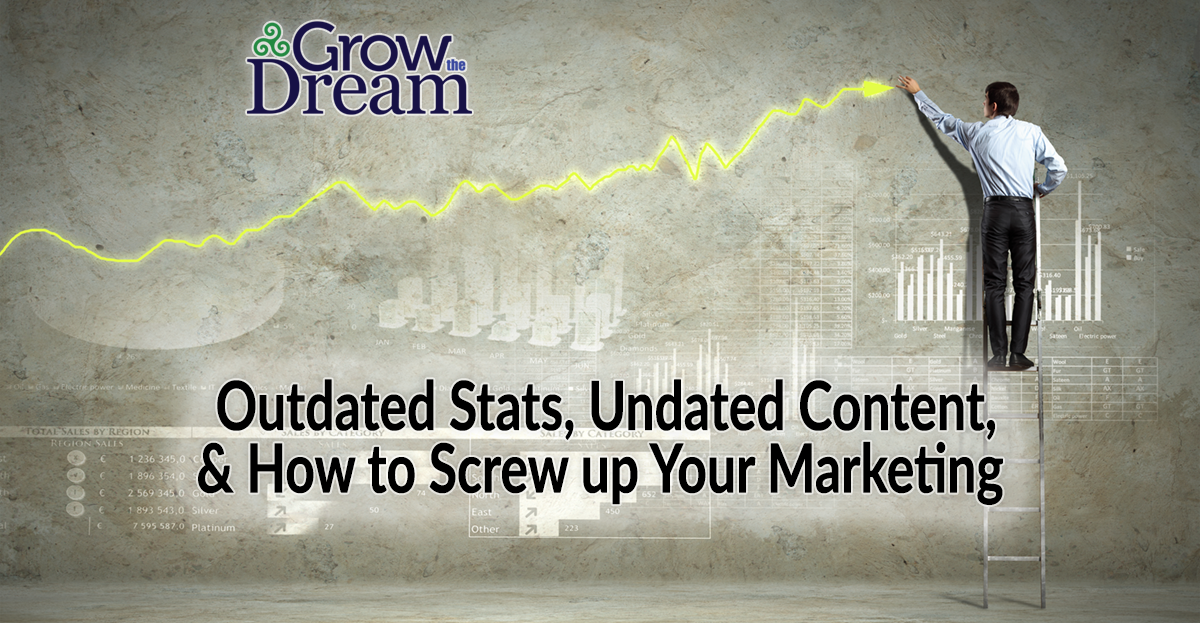 Growing up, there was a particular saying that my mother and the folks in safety school used to share quite a bit. I don’t recall it being an exact number, but the story was that the majority of car accidents happened within 5-miles of your home.

And sure, growing up in the Midwest, in the 70’s, that made sense. After all, most people didn’t travel that far for work, school was within walking distance, and, in my case, so was my dad’s side of the family. The town itself was only 25.29 square miles total.

But where did they get that story from? Looking it up online, I found several references to 69% of accidents occurred within a 10 miles radius of your home. 51% within 5 miles. But while the numbers quoted always referenced the National Highway Traffic Safety Administration (NHTSA), no such data was collected by them after 2008. In fact, despite those numbers being quoted in several places, I could find no evidence that the NHTSA had *ever* gathered and collated such information.

While I’m sure they probably did at one point, they don’t anymore. Yet blogs, articles, news reports and more continue to report this completely outdated statistic as fact. And because they can’t find the original source, they link to other sites that have also posted the stats, as if that makes them better.

People like statistics. Especially marketing and sales people. Despite studies that numbers aren’t as convincing, we still rely on them to build credibility and prove our points. There’s a reason one of the steps of Tom Hopkins’ wildly popular How to Master the Art of Selling teaches us to accelerate the sale by first proving your believability.

But that’s also why bad statistics, or ones that you can’t back up, can destroy your credibility and the sale.

Yet, for some reason, marketers, who should know better, repeat outdated numbers almost constantly. I’m not sure if they’re hoping they won’t get caught in it, are lazy, or assume others are just as lazy as they are.

What’s really scary is the breakdown Mark Suster did in this article he wrote ten years ago. He details how, when he was a Strategist consulting with Sony, he tried to track down solid data. And discovered that the people collecting the numbers weren’t economists or statisticians. Further, they followed their bosses’ lead to extrapolate stats from entirely anecdotal information, and just made up numbers that looked good when they couldn’t find them.

What are the odds this stopped happening?

Of course, that’s a worst case scenario, but as I point out every time I email a media outlet that they screwed up, it’s your responsibility to fact check. You don’t get to pass the blame onto the other guy that screwed it up and you quoted.

It’s your job to get it right.

Which brings us to some irresponsible fakers. I’m not sure why Neil Patel decided to stop dating his online posts, maybe to help them end up the ranking SERP in your Google results? I don’t think he intends it for evil, but it can be confusing. And then there’s certain contributors on HubSpot, and others marketing sites. It’s hard to grant them grace when they’re recycling old blog posts and “Latest Statistics” pages. They simply rename them “[2020 Edition],” without updating the content inside. That’s borderline evil.

As fast as everything changes in business and especially online, do you want to mislead your readers or clients by presenting numbers that are 7, 8, or even 10 years old? Just as an example, in 2011, Facebook Messenger was still known as Beluga. And one of the top social media platforms? Google+!

While Instagram and Pinterest are still going strong, how many other social media platforms have come and gone in the last 10 years? Bing was only launched in 2009. Tik Tok, one of the fastest growing platforms online has only existed since 2016!

How many times have Facebook and Google changed their algorithms in that time? If the stats you’re posting are based on a previous iteration, how accurate can they possibly be?

But What If Everyone’s Wrong?

Back in March, Disney executives announced they were shutting down Disneyland for 2 weeks because of the California governor’s COVID-19 concerns. Major newspapers, TV news broadcasts and trade magazines reported that it was only the 4th time it had shut down in history. The JFK assassination, the 1994 Northridge Earthquake, 9/11, and now.

Only one problem – almost NONE of that is true. Some of it’s just confusion – the park didn’t open on the day of mourning for JFK, not when he was shot. It doesn’t take into account the numerous times the park opened late or closed early, or in December of 1987, when it stayed closed due to foul weather warnings. It did close for 9/11 – after the attacks, because time zones. But the 1994 Northridge earthquake? Disney had every ride inspected and then opened to the public, only missing a couple hours of traffic.

And this truly #FakeNews is continuing to be reported in the national media.

Regardless – YOU need to ensure that the facts, numbers, and stories you’re telling on your content blog are accurate. Not to, is just to open yourself up for ridicule, mistrust, and maybe even a lawsuit.

Besides, now more than ever, authenticity is what consumers trust – 90%, as of February of 2019.

I’m going to close this out with a short list of the sites you should be going to for numbers first. All of these update their numbers, case studies and reports listed on a regular basis. They’re all dated. And they don’t promote numbers that are more than2 years old (although many are archived).

Most of them are free – some charge a fee to go more in depth and/or give you access to forecasting models based on current data. Here’s a hint – the investment is probably worth it, depending on who your ideal client is.

Take the time to get accurate numbers. Sometimes this means digging back through page after page of sites that reference other sites and so on to get the original post/statistic date – as I did with much of the material here, and on our other posts.

Take advantage of the sites I’ve listed above to make sure your data and conclusions are accurate. And by all means, if you need help, please reach out.

We help small businesses use proven strategy to build their online and offline marketing presence, fill up their sales funnel and grow their business dreams. We even offer packages to locate and author content just like this post for your business and site. Don’t wait – put your dreams into action today.