Give Them a Menu: Why Less Yields More 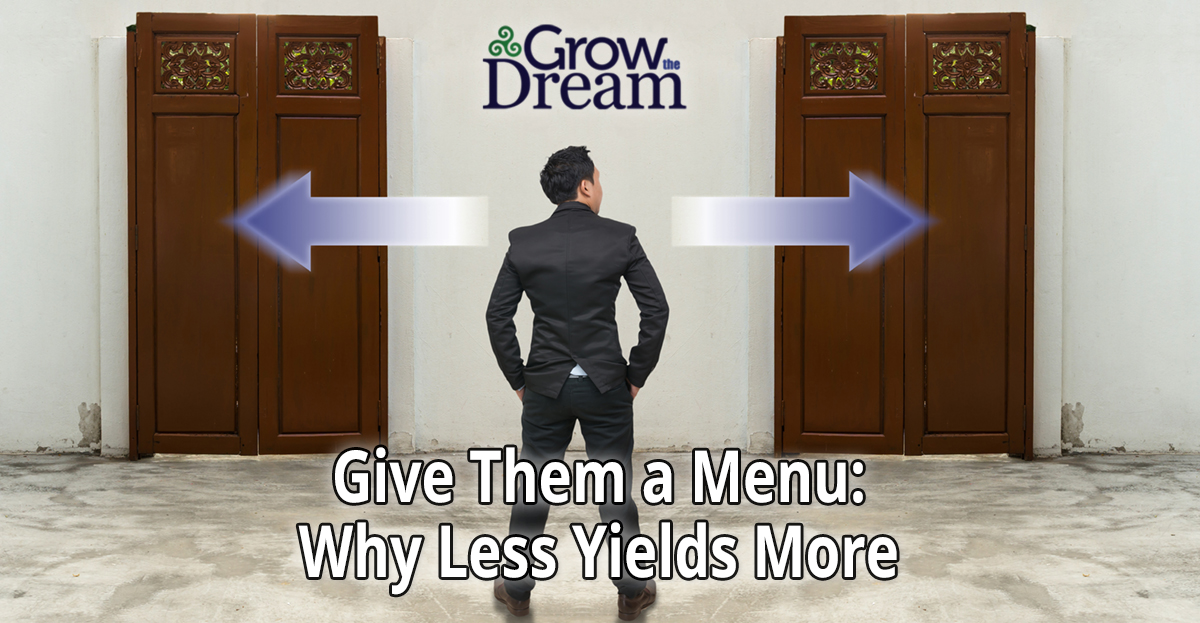 As an actor and a screenwriter, I tell people all the time that in the Hollywood industry, you need to think more in terms of selection than rejection. For creative types, especially actors who are essentially selling themselves, it’s a way of not taking the process personally. Which, admittedly, can be very hard. Again, they’re literally selling who they are as a person. Many solopreneurs and small business owners can relate, I’m sure.

But instead of bemoaning the constant rejection, the best approach is to reframe things. Think of it like shoe shopping. When you go looking for a pair of running shoes, you’re not looking for stiletto heels. Even if you saw the most incredible, perfect pair of stiletto heels, you’re not going to buy them – because you’re shopping for running shoes. It’s not that you don’t love the stilettos, or they’re not exceptional for what they are, you’re just not shopping for stilettos.

In the same way, a pair of stilettos cannot masquerade as sneakers, or whoever buys them will be severely disappointed. They don’t need stiletto pseudo sneakers, they need actual sneakers.

I’ve talked several times in the past about how the riches are in the niches. And you definitely need to focus your business approach to target your ideal customer. Today, I want to talk about a focus of a slightly different stripe. Focusing your offerings.

When I was growing up and even into early adulthood, the prevailing theory was that more options lead to more choices. 31 Flavors. Thousands of combinations. The more you offer, the more sales you’ll see. This idea persisted even in the face of such anecdotal evidence like the famous story of Dave Thomas. Dave is of course, most famous as the founder of Wendy’s. But first, he was instrumental in the success of a different fast food franchise – Kentucky Fried Chicken.

When Indiana’s Hobby House restaurants partnered with KFC, the house of chicken was offering a multitude of menu items. Dave’s suggestion that they whittle things down to their signature fried chicken in the red and white striped bucket put the growing restaurant on the map. Dave also suggested that the Colonel appear more often in the commercials.

Within about 15 years, Dave was a millionaire and decided to start his own chain – Wendy’s -with square patties, because they “didn’t cut any corners!” And of course, in 1989, he heeded his own advice and relaunched his baby with commercials starring himself.

While this is just one story of many, marketers and business owners continued to insist that the way to increase sales was to offer more. Normally, I’d put in a plug here about how Coke and companies of that size are the exception that proves the rule. But they’re not. Diet Coke was spun off as its own brand, after it failed to gain the market share that Tab dominated in the 70’s and 80’s. Not to mention, Coke has attempted a coffee-variation on their carbonated beverage at least three times, all with limited success.

It wasn’t until a pair of graduate students from Columbia and Stanford released a study on “selection demotivation” in 2000 that marketers took real notice.

Sheena S. Iyengar & Mark R. Lepper published a paper titled, “When Choice is Demotivating: Can One Desire Too Much of a Good Thing?” Essentially, they did a series of controlled experiments that revealed a startling conclusion. While multiple options initially drew attention and interest, inevitably, the quantity of choices led to fewer sales. In fact, by limiting options in their experiment from 24 to 6 increased sales by nearly 10%.

Too many options resulted in a harder decision-making process, which ultimately led to much fewer sales. In their second trial, sales were removed from the equations. Students were given options to write essays for extra credit. Not only did more students who were offered limited options complete the assignment, but the essays turned in by students with limited options were markedly better than their counterparts.

Their third experiment found that people randomly assigned with fewer choices opted for a positive result nearly 50% more often than those given an extensive selection to select from. Their conclusion was the opposite of what they and leading marketers had expected. Too many options actually significantly decreased the chance of ANY choice being made.

Psychologist Barry Schwartz goes one step further – between analysis paralysis and buyer’s remorse, he posits that Americans are more depressed as a nation because we have more freedom to choose. There’s even a theory that a significant influence on Steve Jobs maintaining his status as a genius innovator was his decision to wear the same thing every day. Removing the decision of what to wear each day left him more decision making resources to devote to Apple innovations.

So how exactly does this relate to your small business? In addition to your efforts to streamline your marketing, anything you can do to minimize the effort it takes for your customer to make a decision will increase sales.

A la carte pricing and multiple options may seem like the key to getting more sales from more people. But in truth, it’s easier to get larger sales by packaging your efforts. Yes, you get fewer sales, but they’re more significant purchases. It also builds loyalty and connection to your product or service.

As an example, years ago I worked for a financial services company. They underwrote life insurance, refinanced mortgages and brokered retirement accounts. But they didn’t sell ANY of those things. They sold a total financial makeover. Their core business was life insurance. But they packaged everything together to serve multiple financial needs of the typical family. By refinancing customer’s mortgages, they eliminated debt and freed up cash to put towards life insurance and the ability to start investing in retirement.

Now instead of three companies, all with separate billing and infrastructure and hassles, customers had a single point of contact. One that was helping them fulfil their financial goals. A single company that assisted with all of those transactions. As the mortgage dwindles, they divert more money towards retirement and life insurance needs diminish. So instead of three individual transactions, the business had developed a happy, loyal customer, committed for life.

They also established themselves as a credible experts. By offering potential clients ONE product that analyzed their current financial state AND gave them a plan to reach the financial goals the client identified, they subtly led the customer to an easy decision. A decision that was truly in their best interest.

Getting Down to Brass Tactics

Simplify, simplify, simplify. I can’t write this enough. Decision paralysis doesn’t just affect our customers. It can also cripple small businesses who are trying to do too much and serve too many potential clients at once. Dr. Schwartz also observed many instances where companies cut down on options offered to customers, purely to streamline their costs. In almost every instance, their sales increased and their employees were more efficient and even happier.

Presenting your services in easier to understand packages saves you time and money. These packages can be easier to show visually and simpler for the client to commit to. They know what to expect and what to not. Customers overwhelmed by options get both confused and scared. As a result, they will usually pinpoint the cheapest option as the easiest and less risky – even if it’s neither.

By presenting a few, fully-packaged options, you display credibility and leadership. And the client is more likely to choose a higher cost option because they inherently trust that you know what your customers need. Especially if you’ve demonstrated that by targeting your marketing efforts at an ideal client. And that’s true even if they fall outside of that proverbial customer bullseye.

Just like the financial services company, you can create a better, curated experience for your ideal clients. Suddenly you’re not a salesperson, but a quality steward, helping customers find the best solutions for them. A travel guide, providing them access to the best there is to offer.

Jack of All Trades, Master of None

While this turn of phrase was initially intended to be a compliment, we’ve strayed far from its origins. We live in a world where the classic Renaissance man is no longer valued because there are so few who actually embody it. As a result, a company offering many options is perceived much like the man who can’t keep a job. We don’t value knowing everything, because we don’t believe people actually do.

Too many options to choose from and customizations to decide about may cause the average person to believe that you aren’t an expert in ANYthing. Even though Wendy’s offers salads, chicken, and even fish (there’s still Lent), they made their mark by focusing on the square burger. The same is true of KFC, who shortened their name in part because they offered more than chicken. Now they lead Popeye’s and Church’s by only a very small margin in markets that have both.

The Illusion of Control

One final word on choices – typically, you do need more than one. Just like having two to three ideal customer profiles, you want to have three to five options for people to choose from. Especially in the United States, we have a need to feel like we DO have a choice, and we are taking control of a situation. Emphasis on the word “feel.” The perception of control is more important than actually having control.

Just ask anyone who’s seen a magic show. You want to feel like you selected the card, even when the illusionist is carefully manipulating your choice. Even if you perceive it’s happening, if you believe you have the choice, the control, you don’t mind.

In a similar fashion, have your packages laid out in pairs, or at the most, three on the same page. Just like the magician, based on your initial conversation with the potential client you select which of your pairs of options would likely appeal to them. Again, there’s value in not trying to appeal to too wide of an audience. With two to three possibilities at hand, the client feels like they are in control of the decision. And it’s a win-win situation.

Yes, I invented a new word. You may have noticed I didn’t use the word strategy yet in this article. Yet everything I just presented to you assumed intentional tactics. If you want to be successful in business, you must adopt a strategic approach. It’s even more important now, as our world becomes increasingly overwhelmed by options, decisions, choices and just general background noise. Strategy makes you stand out.

Going back to that financial services company… Their main strategy was on educating their clients. They freely taught them the financial essentials that so few of us learned from school. That approach may sound familiar. Of course, every week here at Grow the Dream, we strive to educate our readers on strategic marketing approaches. And no surprise, it’s the bedrock of what we tell our clients to do as well, whether they are creating the content or contracting us to do it for them.

It’s not just to make sales or draw in customers who need our help. It’s also our way of giving back, enriching the small business community by making them smarter and more prepared for success. If you need help, I hope you’ll reach out. We offer free 25-minute initial consultations in addition to the education we attempt to provide with this blog.