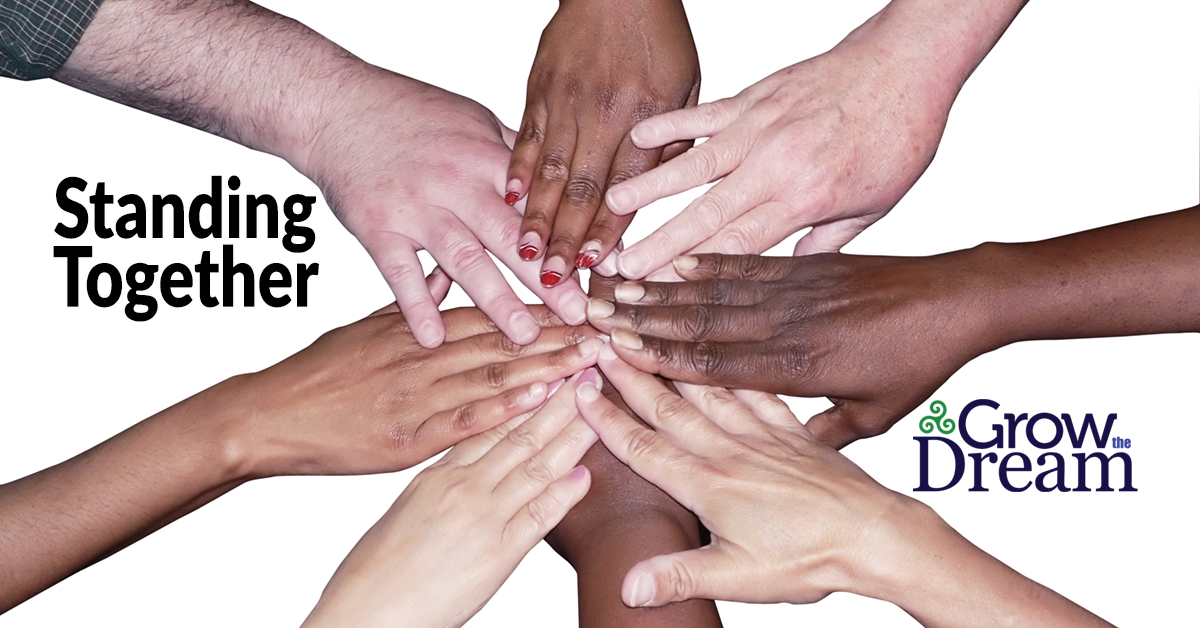 As we reflect on the past weeks in our nation’s history, our hearts are heavy with sadness. In the midst of an unprecedented health crisis that has caused so much hardship and pain, so much turmoil and readjustment in the way we live our lives, so much separation and uncertainty… We have been reminded of our nation’s tragic history of racism and violence.

Yesterday, a nation came together with moments of silence, with blacked-out television stations and with a combined sense of devastating loss and glimmering hope, as the family of George Floyd held a memorial service for him. The police officers who apparently caused his death have been arrested and charged. His family is pleading for peace and change… But his family did not just consist of his relatives. It extended beyond blood to a worldwide community of solidarity. That includes the Grow The Dream team.

We mourn not only Mr. Floyd and some of the other members of the Black community who have lost their lives in a senseless and violent fashion. We mourn the fact that so many in the community are hurting; that it is impossible to imagine the fear and discrimination that continues to plague members of the Black community – old and young – some of whom fear to go to the corner store, ask someone to put their dog on a leash or, even, sleep in their beds at night, without thinking of the possibility that they could be a target of vitriol or violence. Those who, due to prejudice and discrimination, are not able to have the opportunities in their lives to which they are entitled.

The crisis of systemic racism in America is something that demands action and attention from all of us. We stand with those who have suffered, directly or indirectly. And we ask for transformative and peaceful solutions that will affirm equality. So that those in the Black and Brown communities can live and raise their families with the peace, safety, opportunities and joys afforded to everyone under the laws of our nation and of God. To ensure that they are afforded the promise of “life, liberty and the pursuit of happiness” without fear.

This is not a partisan problem – it is a human crisis that demands unity and solidarity.

We must enact change. We must show the haters that love and compassion will always prevail, and that their violence and hatred and bigotry will not be tolerated. Enough is Enough. We must stand together.