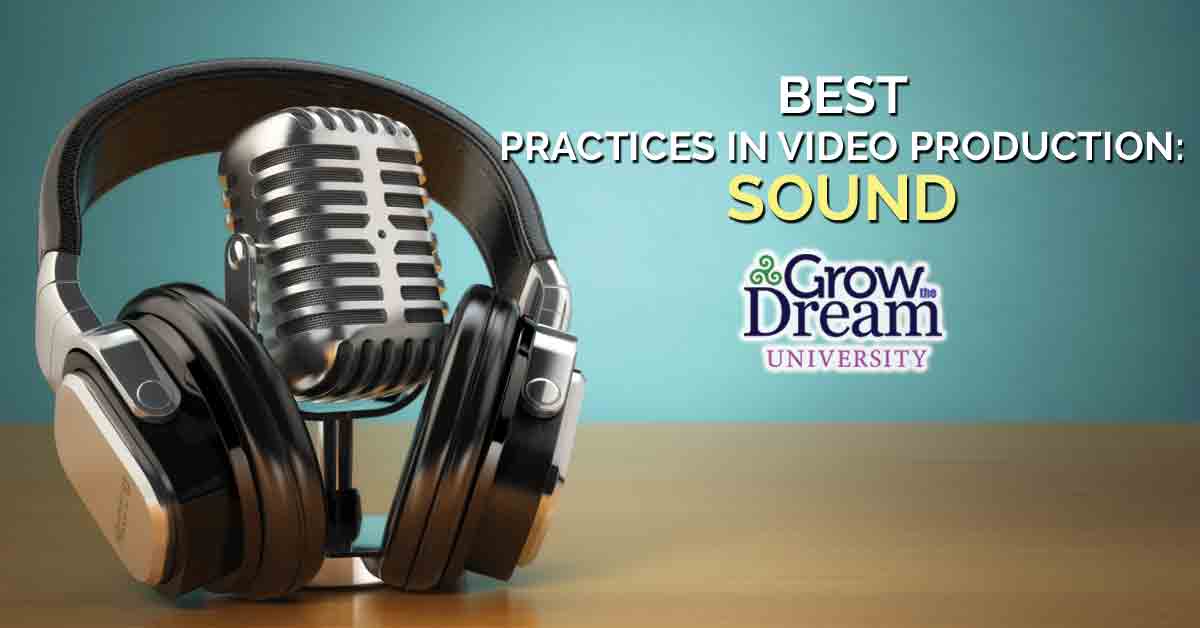 There’s an old independent film adage – “People will forgive bad picture, but they will NEVER forgive bad sound.” I know you’re probably thinking, but I don’t make independent films… But SO many things vie for everyone’s attention today that even the most amateur of films and YouTube videos are created at a high level of quality. So even your simple informational or training video needs to be approached as if it was an independent film.

“Sound is fifty percent of the movie-going experience” ~ George Lucas

Being Prepared is Half the Battle

First, take a breath. The military has an old tactical rule – take the time you are assigned for a task and spend 1/3rd of it in preparation. That leaves 2/3rds for execution, whether by yourself or by others. When you plunge right in with no preparation, generally things take longer to accomplish, and lead to more errors.

Alfred Hitchcock is quoted as saying ““To make a great film you need three things – the script, the script and the script.” It’s fine for highly trained professionals like Christopher McQuarrie and Tom Cruise to start shooting a Mission Impossible movie without a complete script. However, it doesn’t always work for them, and almost certainly it won’t for you.

Take the time to figure out what you want to say before you turn the camera on. I know this sounds like a detour from best practices for sound. But having a great audio recording doesn’t help if you’re just babbling on, never quite getting to your own point. This is especially true of many entrepreneurs who might suffer from a touch of ADHD. Write it down and you’ll be sure it’s right.

When I said write it down, I meant literally, and twice. You should type up what you want to say, and how. Then take that script and put it on cue cards. Not everyone needs to do this, but it’ll definitely help, especially your first few recordings. If it worked for Marlon Brando, it’s good enough for you too.

Practice reading the cards so it sounds natural.

This is also an opportunity to test your equipment and get used to hearing how your voice sounds on tape. Unless you’re James Earl Jones or Don LaFontaine (the famous ‘In a World…’ trailer voice), you’re going to be thrown off a little the first time you hear yourself outside of your head. Test it, play with it, get used to it.

Make sure you’re using good diction. You don’t need to sound like Miss Manners, but if you’re used to mumbling or have other speech tics, lose them now. The same applies if you are generally soft spoken. In person, I tend to be quieter, but when I’m acting, I have a theater voice that projects. You don’t need to sell the video to the cheap seats, but make sure you can be heard.

Pro-Tip: Make sure the microphone is turned on. It sounds simple, I know. But back in the day, I worked with FOX News’ Shepherd Smith and he was notorious for going on camera during a live broadcast with his mic turned off.

And, again, make sure the microphone you’ve chosen – more on that later – is recording sound the way you want it to. Not too tinny or bassy, or not picking up your refrigerator or ceiling fan too loudly. Utilize speakers or preferably headphones to test your recorded audio levels.

Just as with the Best Practices for Lighting post, you’ll want to select your location carefully. If you’re shooting in public, you don’t want too much background noise,  like recording next to a freeway or too near the airport.

Also, if you’re shooting outdoors, invest in a wind sock. Even the lightest breeze rumbles on a good mic and muffles the audio you want to hear. There are foam windscreens, softies and blimp systems. Foam is the most basic, and is generally best indoors. Softies look like a grey fluffy dog on your mic, and are the best budget-conscious option. Blimps are typically used by professionals on film shoots. They offer maximum wind protection, but at a considerably higher price.

If you’re recording indoors, you still have a few things to worry about. Sounds still penetrate your home or office. Noises you’ve grown accustomed to, like a ticking clock or the hum from your air conditioner, are multiplied when you’re recording quality sound. Many of my friends that do Voice-Overs utilize their closet, but that isn’t really an option when you’re on camera.

Don’t forget to mute your phone or laptop, and, if you can, shoot when everyone’s out, or at least aware you’re recording.

Get as close to the Mic as you can, but not too close. This can be a challenge when you’re on camera. Unless you’re doing a live broadcast of a podcast or radio show, it looks weird to be wearing headphones and holding a giant microphone. If you can afford to invest in a lavalier mic, I’d encourage it. In a pinch, you can even record decent audio on your smart phone – using the voice note feature.

Generally, you will want to avoid recording audio with your camera. I know it sounds easier, but mic inputs on cameras are tuned to raise and amplify the sound coming in, including the silences between sound. That means your sound, especially if it’s just your voice, is going to sound either muffled or scratchy. And you’ll hear EVERYTHING else when you’re not talking. When recorded together, the camera can causes audio issues if the image is too bright or dark. And sometimes internal mics on cameras record the camera’s mechanical act of recording.

I almost always use an external mic, plugged into a digital recorder. I’ve found that Tascam and Zoom offer some of the best high quality digital recording ability. There are a lot of more expensive options out there, but you should be able to find options in the $100-300 range.

Pro-Tip: these digital recorders may also sport their own mics. In most cases, it’s still better to plug in a separate mic.

Microphones vary in price and quality, depending on what you need. You might be tempted to skimp on the mic, especially if you’ve paid a bit for the camera. But don’t. In the audio world, with minor exceptions, you do get what you pay for. Test the mic, but generally invest in the best mic you can.

In an ideal world, you can repurpose the microphone you buy for your podcast, but often that’s not possible. Most podcasts tend to use an Omnidirectional Mic, so that everyone and everything can be heard.

For a video recording, you’ll want to use an Unidirectional Mic – or one that only records what it’s pointed at. The USB Blue Yeti mic I use for recording voice overs can be switched to unidirectional, but it’s too bulky and unwieldy to use on camera.

As I mentioned, in a perfect world, a lavalier mic is going to be your best bet. Even though they’re omnidirectional, they’re small and can clip easily to your shirt collar or tie – or can even be hidden behind them. You can use wireless lavs (the slang term) or wired, if you’re close enough to the recorder. Wired are going to be cheaper overall.

Pro-Tip: If you’re getting some static or interference off a lavalier mic, loop about 1½ inches of the cable, then gently clip it behind the mic. I don’t know why it works, but it does.